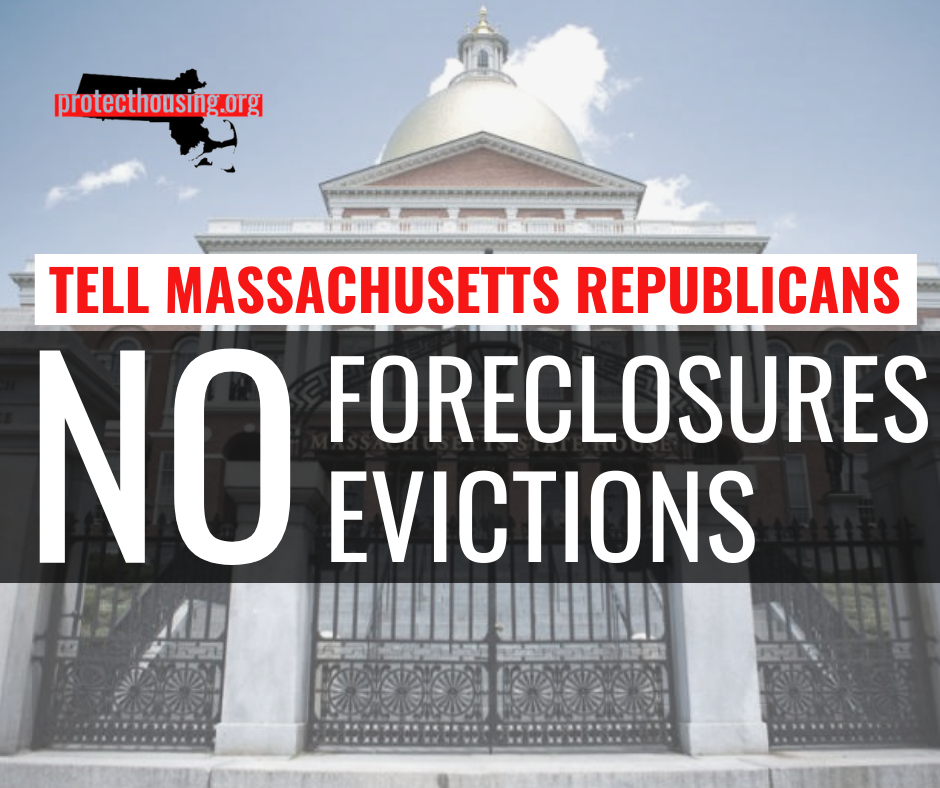 Massachusetts lawmakers need to stop evictions and foreclosures the duration of the COVID-19 crisis.

Today (April 16, 2020), Republicans in the Massachusetts House blocked a bill that would protect housing as we face the worst public health emergency in a century. With our economy shut down and people wondering when their next paycheck will arrive, we need to protect Massachusetts residents from being kicked out of their home. This is a time for solutions, not partisan politics.

Make your voice heard — together, we will tell the Republicans in the House to stop blocking housing protections.

By signing the petition, you are helping ensure that the Republican lawmakers in the State House hear your voice and this important legislation passes.

A vote could come as soon Thursday, sending the measure to Governor Charlie Baker.

​Lawmakers on Beacon Hill have agreed to a measure that would block nearly all evictions in Massachusetts during the coronavirus crisis, and could vote on it as soon as Thursday.

A committee of House and Senate lawmakers said Wednesday that it has come to terms on a compromise version of the bill, which would prohibit landlords from filing eviction cases against renters or small businesses, and banks from foreclosing on mortgage-holders, as long as Massachusetts remains in a state of emergency. The House quickly adopted the bill late Wednesday and a vote in the Senate could come Thursday. If approved, it would then go to Governor Charlie Baker for his signature.

“This legislation will offer much needed relief to thousands of renters, homeowners, and small businesses across the Commonwealth," said Representative Aaron Michlewitz and Senator Brendan Crighton, who helped steer the bills through the Legislature. "It is our hope that the Legislature will approve this bill and send it to the governor as quickly as possible."

​“This legislation will offer much needed relief to thousands of renters, homeowners, and small businesses across the Commonwealth," said Representative Aaron Michlewitz and Senator Brendan Crighton, who helped steer the bills through the Legislature. "It is our hope that the Legislature will approve this bill and send it to the governor as quickly as possible.”

​“We are very pleased with the bill, given how big a burden this is for tenants and homeowners,” said Lew Finfer, codirector of the Massachusetts Communities Action Network in Dorchester, in an e-mail.

Real estate groups had pushed back on some of the bill’s more aggressive protections as it moved through the Legislature, saying commercial leases should be treated differently than residential contracts, and noting that initial eviction filings are sometimes the only way to force difficult tenants to negotiate.

Greg Vasil, CEO of the Greater Boston Real Estate Board, said some apartment-dwellers are hosting parties despite social distancing rules currently in effect, putting other tenants at risk, and that this bill may make it harder for landlords to prevent that type of activity.

​More broadly, Vasil said, the law will make it harder for landlords to operate in Greater Boston, and make them less likely to build much-needed new housing.

​“We all know we need more,” Vasil said. “I just hope this is not going to hurt us with that.”

​With the Legislature meeting in informal session, a measure can be held up if even one lawmaker opposes it, but both the House and the Senate have passed versions of this bill in recent weeks with no opposition. Baker has supported enacting a halt to evictions, but has said little about specifics, leaving details to legislative leaders.