WESTBOROUGH, MASSACHUSETTS -- Representative Patrick Kearney (D - Scituate) testified in support of the commercial lobster and fishing industries at a hearing of the Environment, Natural Resources, and Agriculture Committee held in Westborough at the Division of Fisheries and Wildlife. Kearney is the sponsor of HB 814, 815, and 816. If passed into law, HB 814 will keep lobster fishing open year-round. HB 815 will give the Fishermen Partnership a permanent seat on the Seaport Economic Council. HB 816, a bill co-sponsored by Representative Capano (Lynn) ties the funding of the Massachusetts Department of Fisheries’ budget to the annual revenue of the commercial fishing industry. 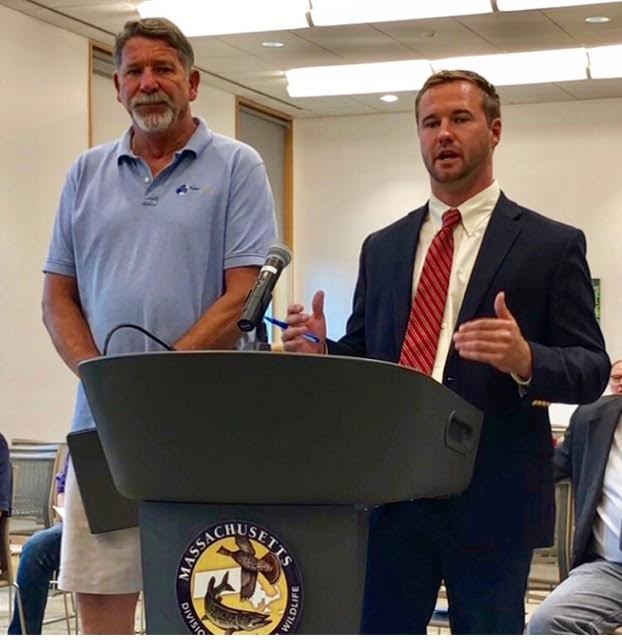 Regarding HB 816, Kearney stated that “a government agency ought not to grow while putting regulations on the backs of fishermen which ultimately put people in our community out of business”. The bill would essentially require that the yearly operating budget of the MA Department of Marine Fishery be funded based on a formula in proportion to the loss or gain of revenue of the commercial fishing industry which is meeting the regulations of that government department.

When asked about HB 814, Kearney reiterated what he has been saying all along: “it’s a false choice between being environmentally friendly and being in support of the lobster industry that supports thousands of jobs here in Massachusetts. Despite all the fearmongering about whales being harmed regularly by Massachusetts lobster traps, our lobster industry has taken steps over a twenty-year period, at its own expense, to be environmentally conscious. Lobstermen should be rewarded for such initiatives, but instead, state regulators are threatening to restrict their livelihood even further. That’s why legislative action is needed to ensure that our lobster industry is viable year-round”.

Additionally, Kearney also testified in opposition to the ban on commercial striped bass fishing. Out of all the striped bass that are caught in Massachusetts, only ten percent are caught by commercial fishermen. There is no reason to cripple people’s livelihood when the majority of bass are being caught by recreational fishermen who won’t be affected by the legislation.